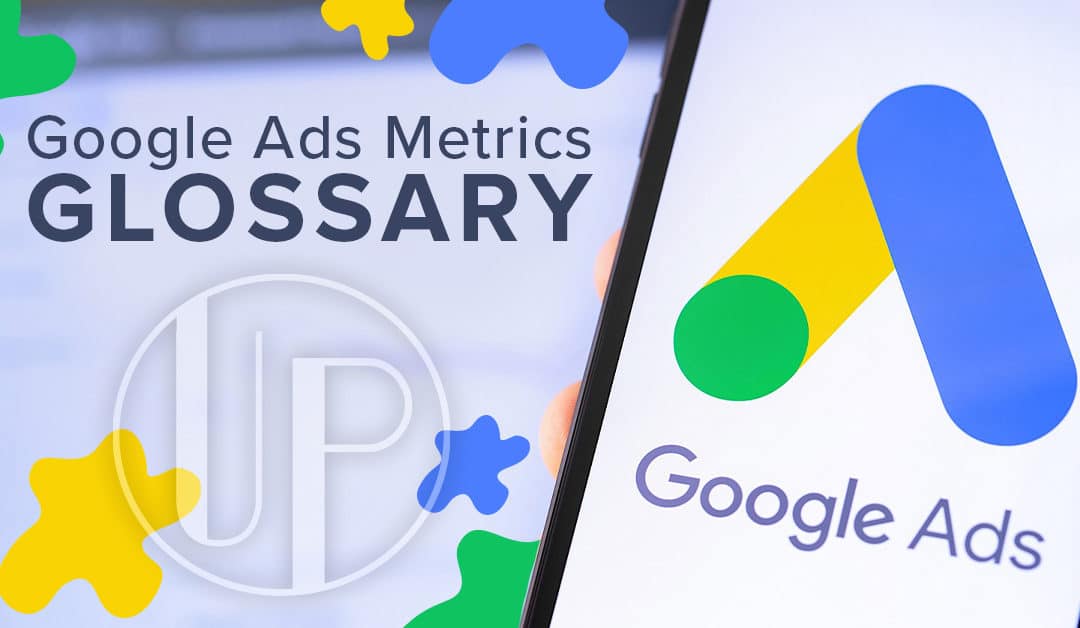 “CTR.” “CPC.” “View-Through Conversions.” “Impression Share.”  If you have dipped your toe into the pool of Google Ads before, you probably noticed this terminology. understanding Google Ads metrics and how to read them can be overwhelming at first blush. All of UP Market Media’s Google Ads clients receive monthly reports detailing their Google Ads Campaign(s) performance.

We all know that this data is important, but the significance of the data is lost if it is not being understood, analyzed, and used to calculate the next move. To help better understand Google Ads Metrics, we’ve developed this handy Glossary. While it doesn’t include every single Google Ads metric (there are hundreds), it covers the basics, and the metrics that are your Key Performance Indicators (KPIs). Let’s skip testing the water today and dive right in.

Impressions vs. Clicks vs. Conversions

Some digital marketing agencies like to show off campaign clicks results from Google Ads as a success story. Clicks alone should never be the deciding factor for whether a campaign is successful or not.

Impressions – Number of times your ad is being served/being seen.

Clicks – Number of times your ad was clicked.

Conversions – Counted when someone interacts with your ad, then takes an action that you have defined as valuable.

While all these statistics are important to consider, an improperly managed Google Ads campaign can be spending your full daily budget and generating tons of clicks, but none with any value due to lack of audience targeting and/or poor keyword management. Correctly monitoring and tweaking a campaign on a regular basis helps to ensure every advertising dollar is being spent wisely.

It is also necessary to establish conversion actions (i.e., phone calls generated from your website, contact form submissions, quote requests, etc.) for any Google Ads campaign to have a better understanding of the success rate and return on investment. Comparing these results to the organic results your site generates gives you an overall perspective of the campaign’s performance.

More About Clicks: CTR and CPC

Average CPC – CPC stands for Cost Per Click. Google Ads shows exactly how much money is spent on each ad, keyword, extension, and more. The Average CPC takes the total amount spent and divides it by the number of clicks generated. Consider the example below

So far, $64.45 has been spent for 45 clicks, which means the Average CPC is $1.43. While some clicks may have cost more than $1.43, and some less, the overall average is $1.43. Keeping an eye on keywords and search terms that are costing too much per click, but aren’t necessarily bringing in any conversions, is an important part in the Google Ads management process.

These metrics show a look at your ad performance compared to competitors.

Search Impression Share – Google has an estimate for the number of impressions your ad is eligible to receive. This estimate is calculated using factors such as targeting settings, approval statuses, and ad quality.

Search Impression Share divides the actual number of impressions you received by Google’s estimate. You can see where you rank alongside your competitors. The above graph shows impression share on the Y-axis and outranking share on the X-axis.

Since conversions are actual leads and actions that your new potential customers are taking, they are very valuable. Aside from the conversions we covered earlier, there are a few other metrics to know about:

Cost / conv. – This one is pretty straightforward: it’s the amount of money spent divided by the number of conversions. The rule of thumb is the lower this number, the better, but it really depends on the value tied to each conversion action. Google Ads even offers a Target CPA bidding strategy, where the campaign is adjusted to bid only when the estimated average cost per conversion is near a certain amount.

Conversion Rate – This is an average of how often an ad interaction (click for text ads, view for video ads) led to a conversion. Like the CTR, it’s a great way of determining how effective your ads are, but adds an extra layer of success thanks to the conversion action.

View Through Conversions – Google is able to track when someone sees, but doesn’t interact with (i.e., click) on your ad, but then later completes a conversion action. This is especially useful with video or display ads. For the record, an impression of an ad is recorded when at least 50% of the ad is on screen for one second.

When it comes to analyzing Google Ads campaign results and understanding them, there are a few final things to keep in mind:

UP Market Media is a proud Google Partner. If you’re interested in venturing into the world of Google Ads (and yielding serious results), contact us. We would love to strategize with you.